Memories of Passing Strangers by Dick Prior

The Welsh international is one of the biggest international photo exhibitions in the country. Although the full statistics are not yet available, each year the experimental/creative section has seen over 1500 images from over 400 people from more than 50 countries. To get the award for best in section represents my highest achievement so far in exhibition photography. 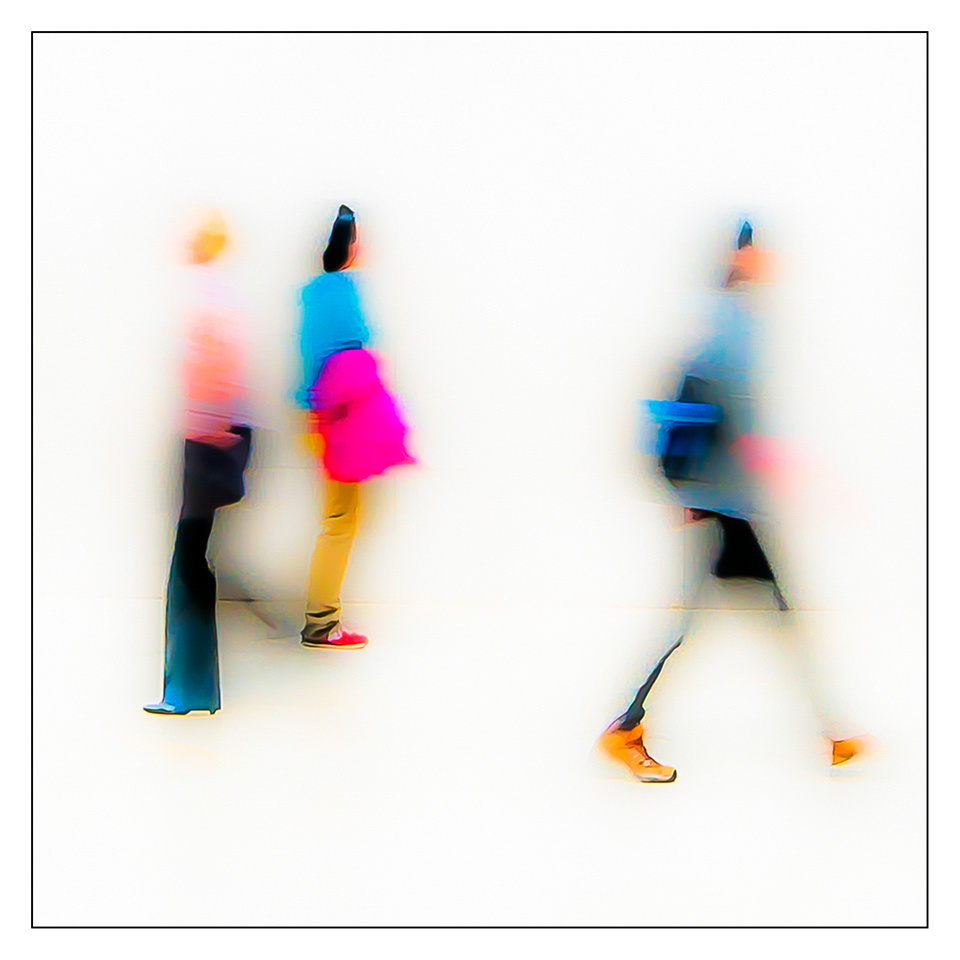 Memories of Passing Strangers © Dick Prior

The story of the picture is quite a long one. The original picture was part of a series taken during a project I was doing in 2012. The basic idea behind the project was to express my feelings about being a lone observer in a crowd and so I deliberately set about taking slow shutter speed pictures of people moving against plain backgrounds in busy places. The purpose of the slow shutter was to show the individuals without identifying features, whilst keeping enough information for the viewer to see some purpose in their actions. In 2012/3 I used 4 out of 160 exposures from visits to the British Museum taken in January and July, to enter Internationals and National BPE exhibitions. Between them they gained 10 international acceptances and 17 in BPE before I moved on to other creative projects.

In December having gained EFIAP/b I worked out that I needed 50 new, quality pictures to progress to EFIAP Silver. Consequently, I spent a lot of spare time going through my back catalogue re–examining the pictures from 2012. So 42 months after taking the pictures, I found a further 12 that I felt had potential and amongst these was ‘Memories of Passing Strangers’.

Technical Issues: The original picture was taken in the central court of the British Museum on 19 July 2012, with a Nikon D300 (DX) body mounted on a small camera support and triggered remotely. The lens used was a Sigma 12-24mm at 24 mm, 1/8th second at f29, ISO100.

It was not actually processed until December 2015. Much of the processing was in Camera Raw. The background was a pale yellow and the ambient light was green (from the glass roof) so the first adjustment was to the white balance. I used the white balance tool selecting the wall and this rendered the background in grey. Next I increased the exposure by 2 stops and the vibrance and saturation by +15 and +23 respectively.

The image was then opened in Photoshop where I used the sponge tool to selectively increase the saturation of the colours in the clothes and then the sharpen tool. The final adjustment was to selectively apply a 4 pixel Gaussian blur to remove any unwanted ‘artefacts’ in the picture. It was then cropped square and saved.

Much of the ‘creativity’ was in the taking stage and as explained above, most of the processing was in Camera Raw but this does fit into the ‘Altered Reality’ (aka Creative or Experimental) sections of exhibitions? However, there are not a lot of creative sections around and so this year it also got entered in Open Colour sections as well. Before the Welsh Salon, it had gained 8 acceptances with higher marks in Creative sections than in Open Colour. When it came to the Welsh Salon it gained 15/15. This would not be the only picture to get the top mark as a 15 indicates it should receive an award. There will be about 10 awards in the section and most of these would also get the top mark but the winner is selected by agreement of the 3 judges.

Perhaps the main lesson that comes from this is ‘be very careful about what you send to the recycle bin’. You should note that as you become more experienced and develop both a better ‘eye’ for a picture and more advanced Photoshop skills, pictures that were previously beyond help suddenly have potential.

At present I have what I consider 3 of my best pictures on the wall at home, this one will join them. These are not my most successful but are ones that represent my ‘style’ of photography.